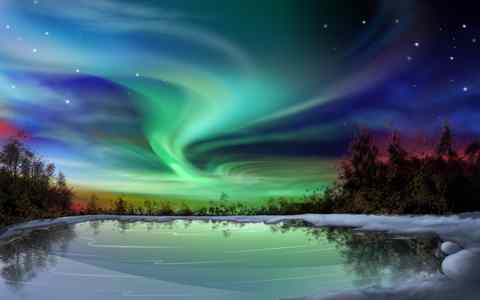 In fact, the northern lights are caused by the sun. When particles are emitted by the sun and strike atoms in the earth’s atmosphere, these atoms light up, producing the beautiful colors we see in the aurora borealis. Speaking of translations, this classical name for the northern lights was coined by Galileo, and means “north wind.” As you can only see the aurora borealis in the northern hemisphere, and it dances like the wind across the sky, this name makes sense too!

From our sun, electrically charged particles are continuously thrown into space, called the solar wind. This happens at an average speed of 400km / sec, but can vary between 250 and 2,500km / sec. A small part of these particles will reach our earth after a journey of about 150 million kilometers.

The best period to see the Northern light

In Finland, Aurora Borealis is best seen in late autumn, winter and early spring, between September 21 and March 21. However, there are no guarantees that you will actually see the astonishing spectacle at Northern Lights destinations. Clouds and a full moon often obstruct the view. As magical as the natural phenomenon is, so special is the unpredictability. There is a website that predicts when you can best see the Northern Lights: Aurora forecast.