The Best Time to Visit Finland

Definitively the best time to visit Finland is during the summer months of June, July and August. Then the climate is warmest, the days are longest and the blossoming landscape at its prettiest, and when tourist facilities and transport services operate at full steam. Also late spring, especially May is really nice.
Summer is almost always sunny and clear, with temperatures rarely stifling: the warmest month is July, which averages 17°C, though highs of 26°C are not unheard of, especially in the interior.

The Varying Weather in Finland
Contrary to what many travelers believe, Finland’s climate is quite diverse and varied throughout the year. Not surprisingly, July is the country’s warmest month and February is the coldest, and those two months are also the wettest and driest months, respectively.

The overall climate is not as cold as many visitors think. Even though it’s at the same latitude as southern Greenland, the country receives warm airflows from both the Atlantic Ocean and the Baltic Sea. Still, the weather is variable and can change quickly, especially in the winter. Winters are long and cold and the country’s northern part might have snow on the ground for nearly half of the year. 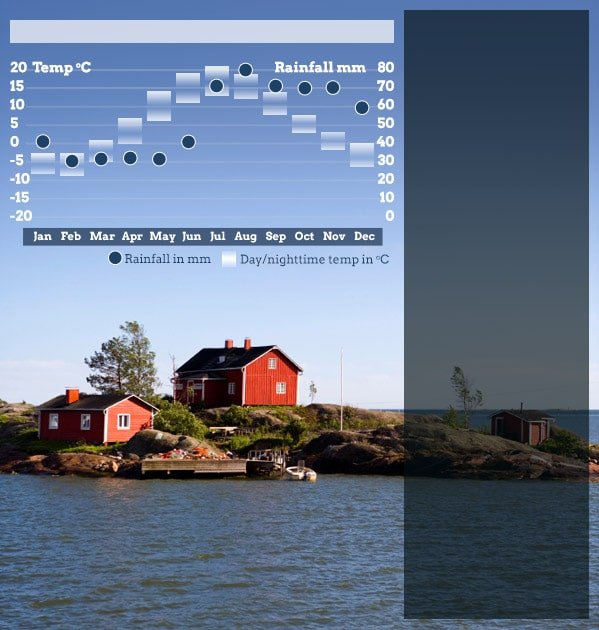 More info about the weather

April
Spring can be highly different in various parts of Finland. While flowers begin to bloom in the south, the north is still in the icy grip of winter. This is probably what makes Easter such a low-key holiday in Finland. More events and tourist sites begin to open up in the cities, such as the April Jazz Festival in Espoo or the Reindeer Racing Championships in Inari, but the winter activities in Lapland begin to dry up around this time, and the thinning ice makes some of them dangerous. Most of the northern ski resorts will still be open, however, and will have fewer crowds.
Rainfall: 8 days
Temperature: 3°C

May
May 1st is Labour Day in Finland and with the weather finally clearing up, most locals use their extra day off to relax, take a walk or have a picnic outside. The end of the long winter is celebrated with fairs, a carbonated fruit drink known as sima and funnel cake (the chocolate-covered variety is the best). Overall, it is a great month to see Finland in its lush greenery and take advantage of the improved weather before the tourist season begins in earnest. It is an ideal time to rent a summer cottage before the demand increases.
Rainfall: 6 days
Temperature: 10°C

June
With the sun finally out, most Finns jump at the chance to take their long-awaited summer holidays in June. One of the biggest public holidays in Finland is Midsummer, which is usually on the closest weekend to June 25th. Tradition is to spend the holiday at summer cottages and light bonfires on Midsummer’s Eve. Cities become almost deserted during the holiday weekend and the sun doesn’t set at all in Lapland. The weather can still be a little chilly, especially farther north, but this is still a good time of year to visit Finland and take part in an ancient tradition.
Rainfall: 8 days
Temperature: 15°C

July
This is when summer truly begins in Finland, and the entire country comes alive for a month to take advantage of the brief window of warmth and sunshine, with festivals and special events up and down the country. You can generally expect a heatwave during this month, but the effects of climate change can cause sudden and unexpected heavy rain showers, too. The Finnish countryside is at its most beautiful at this time and perfect for cruises, fishing or berry-picking, so long as you use plenty of bug repellent. The major downside is that the midnight sun can make sleep almost impossible without blackout curtains or an eye mask.
Rainfall: 10 days
Temperature: 17°C

August
August is typically when children go back to school and summer holidays end in Finland as the temperature begins to drop more rapidly than the rest of Europe. The weather is still generally fine, however, especially in the south, so it is a more quiet and relaxing time for a late summer break. It is a good time to go for a shopping spree since most stores have massive clearance sales to make room for their Christmas stock.
Rainfall: 11 days
Temperature: 15°C

September
Finland’s autumn is short but highly underrated. The weather is cold and wet, but not to the point of making accessibility difficult. The cities may be a little grey and grim, but you can still practice your photography, watch the birds migrating or enjoy some indoor activities, since the tourist season is over and they will be less crowded and much cheaper. The Northern Lights begin again in Lapland, particularly around the autumn equinox on September 21st, but the increased cloud cover makes them difficult to spot.
Rainfall: 11 days
Temperature: 10°C 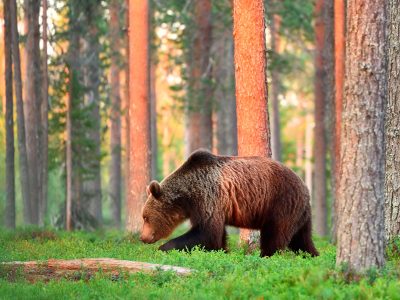